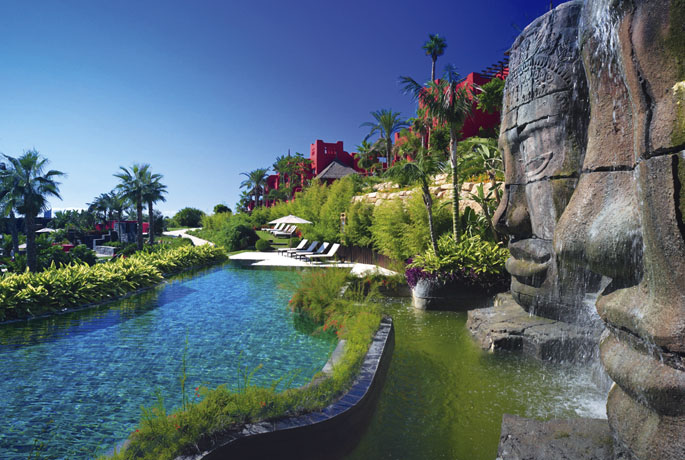 At the luxury hotel in Alicante Asia Gardens Hotel & Thai Spa, we are already enjoying the month of July. That is why today we are taking you to China to cool ourselves off in the incredible Huangguoshu Waterfall.

Huangguoshu Waterfall is considered the largest waterfall in China and East Asia. It is located on the Baishui River, 45 minutes away from the city of Anshun, in Guizhou province. It is one of the most tourist places in the area.

Belonging to the group of karst waterfalls, it is one of the most spectacular and famous ones within this group. It is almost 80 metres high and 100 metres wide. The main waterfall is 67 metres high. Its roar can be heard several kilometres away from the area.

Huangguoshu Waterfall, along with 18 minor waterfalls, was included into the Guinness Book of World Records in 1999 as the world’s largest waterfall cluster. It is the only waterfall on the planet that can be viewed from any angle: from above, below, front, behind, left and right.

Huangguoshu Waterfall´s flow is seasonally adjusted. It changes during the rainy season (May-October) and the wet season (November-April). It usually reaches its highest peak between July and August.

Shuiliandong cave or Water Curtain Cave, located behind Huangguoshu Waterfall, allows visitors to watch, hear and touch the fall, thanks to its 134 metres long. On sunny days, a colorful rainbow adds an extra touch of beauty to this splendid waterfall.

At the 5 stars resort Asia Gardens Hotel & Thai Spa we also have our own falls. Have you ever seen our spectacular Faces of Angkor pool? Exclusive swimming pool for adults only, it will take you to the Far Cambodia in the twinkling of an eye.