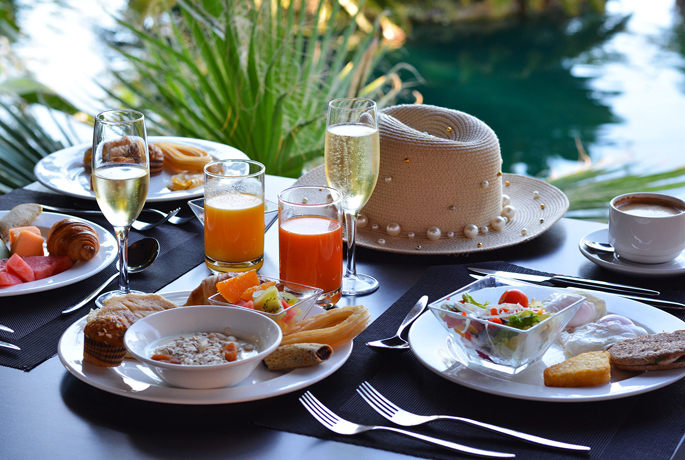 At the luxury hotel in Alicante Asia Gardens Hotel & Thai Spa, as the Asian food lovers we are, we never get tired of discovering their traditional meals. That´s why, today we are taking you around the Asian continent to try their most traditional breakfasts. Are you coming with us?

In order to get know a little bit more the traditional flavours of each region, we are going over 4 Asian-style breakfasts:

India. The two main varieties of Indian breakfast are the North and the South one, although there are more than ten types of breakfast in India, according to the region. The main ingredient in North India are parathas, a type of unleavened pan-fried flat bread. Whereas, in South India, the most popular breakfast consists of dosas, a type of pancake made from a fermented batter. It is very similar to a crepe in appearance.

China. Among the main dishes we find in traditional Chinese breakfast are: baozi, a type of filled bun or bread-like dumpling. Congee, a rice porridge; soymilk, which is usually served with deep-fried dough sticks; and Youtiao, also known as Chinese fried churros,  a long golden-brown deep-fried strip of dough.

Thailand. The traditional breakfast in Thailand has an important Chinese influence. It includes 4 dishes: joke, a thick porridge of rice, served with cooked chicken or pork. Patongo, the Thai version of the donut, a blob of lightly sweet dough deep fried until it is fluffy on the inside and crunchy on the outside. A soybean drink called nam tau-hu, and prepared at home; and khanom khrauk, double pancakes.

If you visit us at the 5 stars resort Asia Gardens Hotel & Thai Spa, you will see how on the outdoor terrace of a restaurant as Udaipur, breakfast is definitely the most important meal of the day.